The smell of lavender bombarded my nose when mum dumped a load of my clothes into my lap and told me to start folding. Ugh, why couldn’t clothes wait until tomorrow it’s not like they’re suddenly going to come to life and run away, they’re just going to stay in pile.

It was the weekend so that meant it was laundry day. The day where playing in the yard is instead replaced by slaving away in the living room tediously folding the very clothes I once use to enjoy, but now I only feel spite for. Every article of clothing had their own pile and then those piles were divided into bigger piles for every member of the family: bro, mum, dad, and I. This made the folding just that more laborious and boring. I tried to get out of it by saying my fingers hurt, but I just got an amused look instead of an understanding dismissal from my duties. After the attempt to escape went sideways I just accepted defeat and sulkily continued to fold and glare angrily at the destroyer of dreams as she continued to fold as well, but at least I wasn’t the only one suffering. To my left sat my older brother and he was in the predicament as me. The moment I looked at him he looked up from his clothing and we locked eyes. There was no need for words we could both see the boredom and hopelessness in each other’s eyes, a skill you pick up when you spend almost every waking hour with that person. We could slowly feel our life drain out of us with each new fold we made. All hopes of escape so we could return to playing were wafting away like smoke from our grandma’s cigarette.

With Isaiah and I falling into despair, our dad decided to act.  It all began when he suggested we take a break from folding and eat a snack. Destroyer of dreams just shook her head and said, “No we’re almost done anyway, so when we finish, I’ll just make us lunch.” Our dad didn’t back down and kept saying we needed to take a break or to at least give the kids one. With our hope renewed Isaiah and I did our best to help convince our mom. We used Puppy eyes, guilt trips, and persuasion through bribery by promising we would keep our rooms cleaned. We held nothing back hitting her with every single trick an eight-year-old and four-year-old had.  But she didn’t budge it was as if her soul’s determination was made from titanium. I could tell she was about to go into the sacred mom’s lecture mode. One of the most terrifying and humbling modes a mom will ever go into. I had to stop it but how. That’s when I my saw my answer in the form a perfectly rolled up folded sock ball. It was perfect, ingenious even; it would provide the best distraction to give my dad and brother time to retreat, and it would be poetic justice by being hit with a perfectly folded sock.

I put the plan into action and the results were instantaneous. Dad and Isaiah managed to scoop up their rolled socks and find cover. I wasn’t as lucky, immediately after being blindsided by my pink princesses balled up sock, mom managed to regain her bearings faster than I expected. It only took a second but somehow, during my sprint to find cover behind a couch my mom managed to gather a basket of socks that were all folded and was firing them off like rockets with great accuracy! I’ve never been so impressed and terrified of my mom until this moment. I could feel the impact of the socks hitting my body as I tried to run for cover. But by the time I was by the couch it was too late I had become the first casualty of the Sock War. As I lay on the ground, I could hear Isaiah shouting how he would revenge me before booking it to the hallway to reload on more socks that dad was holding. But I wasn’t the only one to hear him. in the corner of my eye i could see my mom’s head cock to the left signifying she knew his plan.

That’s when something unexpected happened something that seemed out of a movie or fairy tale. Mom flew. The moment Isaiah had ran she ran too all the while readying two sock balls, one for him and one for dad. She ran and jump on the couch and then used the back of the couch as a diving board to propel herself forward high in the air. I shouted a warning “Zaya, Look out!” But I was too late; it was the beginning of the end. She already had them in her sight.  She cocked her arm and fired off the socks using the hallway wall to help guide her missiles to her targets. It was game over, but just when victory looked nonexistent; gravity came and pulled her back down into the realm of mortals causing her to crash into a pile of folded clothes.

It was dead silence until a sudden wheezing of pain was heard that was then joined by two voices vibrating with laughter. I could hear my dad asking if mom was okay, but she couldn’t stop groaning and wheeze laughing to answer him. I guess folding laundry isn’t boring after all. But I still rather be playing then folding anytime. 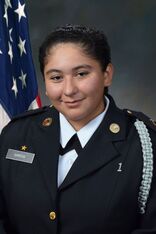 Autumn Garcia enjoys reading, drawing, and hanging out with friends. Autumn also likes sleeping. This will be her second year at NMMI.