People say ghosts are not real, they say it is your mind messing with you. However, I know the realm between of the living and the dead is not as clear as people think. It all happened about ten years ago, back when I lived in the Philippines. The old mansion is like the sanity of the ground it is built on. The ground that buried hundreds of souls beneath. The house lived in a constant shadow, as if the sun has abandoned the place. As a result, the oversized windows that is divided into many small parts stays black with little ripples of sunlight. The shaggy white walls are so cold to the touch, stealing the heat of the warm fingers. The overgrown branches covered the door, warns people to stay off. Old wooden hall ways make a cracking noise when have contacts with weight. The house itself is clean, sometimes too clean that makes me feel uncomfortable. The constant coldness surrounds the air, making shawls a necessity. Having my family around is perhaps the only warmth in my life. There are four floors in the house, which is connected by an intercom system. The living room is on the second floor, followed by the entrance floor. My bed room is on the third floor; a large snowy bed that is shared by my brother and I. A large window, like the compounded eyes of a fly, stuck right next to the bed. Outside the window stood an old tree, which thick branches are dappled with lichen. The ceiling, which is on the top floor is where we study. The damp shadow of the tree swings around, as if a random kid is hiding in the corner, waiting for me to get off guard. I will not even attempt to go there at night.
Perhaps it’s the foolish mindset of a child, or the influence of excessive horror movies. As a kid, I am always scared of dark. Trying to battle through the endless night was a struggle. After closing my eyes every night, even slightest noise will get my blood pressure up. Not to mention the image that I “saw”. That night, the wind was howling, the tree next to my window seemed to come alive. My brother and I laid on the left side of the facing the window, frightened by the evil rite of the tree. I tried to close my eyes, holding my brother’s hands real tight, patting him down. He put is arm over my neck, holding me as of grabbing for protection. This is how we normally survived the nights, however, that night was different. Suddenly, an image of a women appeared in my head, she is looking at us from behind. I was facing the other way, yet I felt I can see her clearly. She has long black hair, maybe to her hip, she has her head tiled down, and all that’s shown was her paled forehead. Her ears are buried under her coarse hair, only the tip of her chin was showing. She wore a one-piece dress, it is all white, but the bottom tip is caught with redness. Her decayed hands have turned into a greenish color, with long fingernails hanging at the bottom, it is obvious to see her spoiled flesh dangled on the tip of her hands. As soon as she lifts up her head, the image disappeared. The only thing left was an image of a drop of blood that seemed to be dripping from her eyes. The second I felt this scene, my brother tightens his hands, holding on to me with all his strength. It is no doubt that he saw the same thing. Right after she left, I quietly whispered “Did you see that?” And I felt his little head nodding onto my shoulders. I then hold him tighter. The wind was still howling, and the night was still long.
Before, I used to struggle with the fear of unknowns. But now, I am battling with the fear of the things I know, but are trying desperately to un-know. 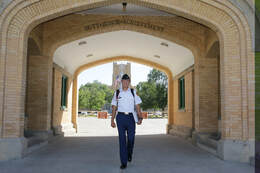 Harrison Yu is a young and passionate guy. He likes adventure and seek for the the happiness in life. All in all, he is just another guy, chasing another dream.