A robber lived in a mountain. This robber is cruel by nature. He haunts the streets, stripping people of their clothes and taking their lives without mercy. Even such a person, came to the poppy will feel fear, become some mental disorder. Then the robber hated the poppy very much and said to himself all day long that it was the most terrible thing. It was clear that there was no wind, but he would feel the wind whimpering when he arrived at the flowers. In fact, there was no wind or sound around him, but only his own shadow and footprints, wrapped in the silent and cold silence. In this way year after year, the robber captured seven women in the street, along with their husbands’ clothing killed their husbands and the women he caught became his wives.
Months passed, then he captured an eighth woman on the street. At first, the robber did not intend to kill the man, but only to strip him of his clothes and kick him off.  But the woman was so beautiful and pretty that the bandit decided to kill the man to death with a knife. The robber said to the eighth woman, “from today on, you are my wife.” The woman nodded, and the robber reached out and pulled the woman up. The woman said that she was so scared that her feet were weak, and she could not walk. The bandit promised and gently carried the woman on his back.
When he came to the door, the seven wives came out to meet him. The robber felt exhausted. The woman’s beauty made the seven wives jealous, and the woman was shocked by the seven ragged wives. The seven wives were once beautiful, but now they are not. She was afraid and hid behind the robber. The newly captured woman asked the robber, “who are these slatternly savages?” The robber said, “they are all my former wives.” "You killed that woman. "The new woman pointed to the most beautiful face of the seven wives and shouted. The robber said, “why do you have to kill her? Why don't you just take her as your maid?”. She said, "you killed my husband, but you don't want to kill your wife? So, you want to marry me?” The robber hesitated, but immediately went to the other wife and killed her with a knife. The new woman says, “you kill all of them!” The robber brandished his knife and only one wife was too frightened to flee. She was the ugliest of the seven wives, and was lame. After he had killed all the wives who had escaped. The robber raised his knife to the lame wife, and the new woman said, “this woman will not be killed, but I will keep her as a maid.” The robber dropped his knife and sat down on the ground. A feeling of weariness welled up in his body. He felt a sudden silence, a sudden fear. His eyes and mind were drawn to the woman's beauty. What kind of anxiety is that? Why upset? What's to worry about? Even he did not know it. The woman was so beautiful that his soul seemed to have been captured by her. There was something familiar about the scene. When exactly? And where? His mind went on. Ah, yes, that was the time. In retrospect, even he was startled. It was the blooming poppy, the same feeling he had when he walked in front of it. Just then the beautiful woman smiled at the robber. Then she gave a bright light and changed into a poppy flower. 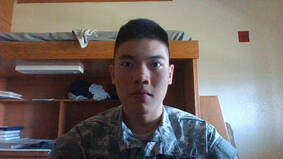 My name is Zerong Dai. I am come from a middle-class family, and I was born in Guang Zhou, China on October 10th, 2000. My father is a civil official at Guang Zhou City Government. My mother is a house wife good at cooking. Although I am the only child of my parents. On the contrary, I have been expected to be a successful man with advanced education. I study hard at school. Besides text knowledge, journalism is my favorite; whenever reading, my heart is filled with great joy and interesting.