When I was younger, I would always go camping with my Grandma and Grandpa. As long as I could remember, every single summer we would load up in the trailer and leave to Silver Lake camping grounds near Cloudcroft. We would spend nearly the whole summer out there only coming back for about a week or so to get more food and do laundry then head right back out.
I remember waking up and smelling the pine trees and the coffee. My Grandma would always make my brother, sister, and I a cup of coffee every morning, regardless of whether or not we would actually finish them. The coffee wasn’t like any ordinary coffee though, it had more sugar and cream than any cup of coffee I have ever drank or will ever drink. Then my brother and I would head over to the trailer next to ours and go get our cousin to go play. We would play for hours and hours, getting muddy and dirty. Then we would come back to our trailers.
Now my Grandma was a clean freak, everything in her house and trailer was always clean or being cleaned. So she would not let us step one muddy foot in her freshly cleaned trailer, and if we did get in the trailer the first thing we had to do was shower. Our Grandma would always kick all three of us out of the trailer in the morning so she could clean, even though we had just woken up. The smell of Pinesol and the sound of the vacuum would emanate from the trailer for about an hour and a half until our Grandma came out and would promptly tell us that no one was allowed in the trailer until it was bedtime because she had just cleaned it!
My Grandpa was much calmer man, a blue-collar man who was drafted to fight in Vietnam, he had lost his ability to much due to a stroke he suffered when I was around five or six years old. My Grandpa would often sit outside the trailer on these carpets our Grandma had us put out to keep from getting the trailer dirty. Our Grandpa would always joke with us and tell us stories, as I grew older I realized how much my Grandpa knew. However, our Grandpa gave our mother a heart attack because he would let us play with all sorts of knives and other sharp things, but he never just handed them to us and let us roam around with them. He would always teach us the right way to use any tool he gave us, be it a wrench, a knife, or any other sort of tool he always had in his tool bags.
Unfortunately as my brother, sister, and I grew older we went camping less and less. We got busier with school and other activities and as much as I hate to admit it, we were out-growing it. I wish I had gone camping more, it had never occurred to me there may be a last time. I was hit hard with that realization in 2015, when we lost our Grandpa, we gone on our last camping trip with our Grandpa just a few weeks before and never knew it would be the last. Then late in 2020 my Grandma lost her three year battle with cancer. We had to go clean out the trailer I had made so memories in because we just couldn’t afford the payments on it. Objects and certain smells and items were every where cleaning out the trailer. My brother, sister and I had to be the ones to lead the charge in cleaning it because we knew where everything in that trailer was, every spoon, toothbrush, and clothes hanger.
Ten years ago I though I would be camping with my Grandma and Grandpa forever, with the smell of freshly brewed coffee, pine trees, fires, and most importantly, the Pinesol my Grandma would clean the trailer with. I would give anything to go on just one more trip. 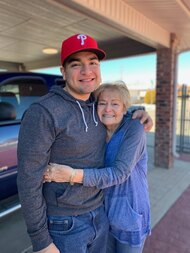 ​Elias Morales is from El Paso, Texas. He is currently in the NMMI ECP ROTC program and will commission as an officer into the U.S. Army in May of 2021. After NMMI he will study political science with a concentration in international relations and hopes to work in the FBI or state department after the army.