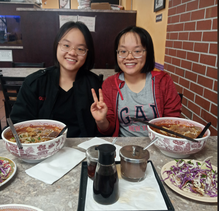 My name is Ngoc Pham. I like swimming and pretend to be my sister. Yes, I have a twin and we are very close. I like making people confuse and see their faces. My dream is to go around the world and taste every kind of food. I want to have my own restaurant.