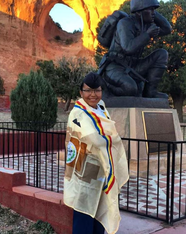 Geraldlynn Notah is from Moriarty, New Mexico, and has been at New Mexico Military Institute for three years. She enjoys to hike, run, play classical guitar, take care of her two little brothers, and sports. Notah is one of the few Navajo cadets that attend NMMI and as she excels at New Mexico Military Institute she graduates in May 2020. Notah will study to become a Chiropractor and work with athletes in the state of New Mexico. Her dream is to play college basketball at Arizona State University and to travel as much as she can.