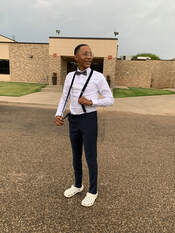 Jaikayo-Javon H. Brown enjoys long walks on the beach and mac &cheese. He loves warm cuddles and ice cream.
He lives with a single mom and one brother, and, currently, is class representative. Not only is he accomplishing in the classroom, but is also an outstanding athlete. Jaikayo's favorite sport is track and basketball. When he gets older he wants to either become an orthodontist or maxillofacial surgeon.