A Whiff Back n Time

I could feel the sun prickling every inch of my skin not covered by my two-sizes-too-big uniform which was glued onto my sweaty body. The heaviness in the air, which could be attributed to either the humidity of the cursed place or the collective drowsiness of the group, wrapped its hands around my throat and throttled me in a slow and silent manner. I could hear the soft thuds of the rifles bouncing off the bricks that enveloped us, followed almost immediately with an unforgiving scolding given by a second-year cadet, exercising a novel sense of power.
All of these memories I had not realized I possessed, flushed in so vividly, taking over each of my senses as if I had been physically transported back in time. The room around me swirled along with distinguished faces of the Commandant’s staff, their drawling voices seemed years and memories away. The only thing that followed me back to the past was the thing that carried me there in the first place.
I could not describe the smell. It was an all too specific brand of men’s cologne that, quite frankly, was of no great significance to me. To be honest I cannot even identify the man who walked into the meeting wearing it. As I tried to grasp any sense of the presence I could still manage to hold onto, my heart suddenly began to race and before I knew it, I was there.
“I’ve been here four years,” said our First Sergeant and I knew at once the cologne was linked to him although it never seemed to stand out while I basked in his presence all those years ago.
“Four years? Imagine that.” whispered a girl next to me who would later leave after only a year at the Institute. I nodded in agreement that four years at NMMI seemed to be just a bit too much.
As suddenly as I heard my First Sergeant’s voice, I was then bombarded with images of the lamp outside my room projecting a soft outline of the window on the ceiling above me. My roommate’s voice floated around the cramped living space, high pitched and full of wonder, asking about my family, spilling secrets about hers that would have never been discussed had she not been so exhausted from the day’s events. One-minute rinses with a complete braided hairdo after 0530 PT, still breathless from the rush to be at the front of the shower line. The complete physical and mental exhaustion hit me like a bitter gust of wind. Faces of long forgotten Preps who treated me like a precious sister suddenly flashed across my mind and late-night marches to Bates in which we took over the cadence and began singing off-key filled my ears, bringing a wave of the sun’s persistent rays like those I felt during the warm summer days in August of 2015.
“…anyways, I hope this presentation has helped to motivate and remind some of you of your purpose here,” said the Commandant, as his voice slowly dissolved me back to reality.
Looking suddenly alert and somewhat bored by the ending of the presentation, everyone shivered from inactivity in the air-conditioned room. Feeling a sense of hope I had not felt in years, I smiled warmly, knowing the heat of those summer days was not the only thing I brought back with me. 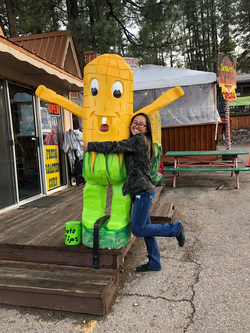 Patricia Ramos has a passion in writing and discovering new challenges to spark growth. She is involved in Ropes Course, the Female Mentor Program, and is currently training for the Bataan Memorial Death March. A native of the Philippines, she now resides in Hagerman, NM, with her parents.